The name of course come from the Greek mythology and in particular from Aphrodite, the Greek goddess of love, beauty, pleasure, and procreation. Her Roman equivalent is the goddess Venus. She is identified with the planet Venus.

As with many ancient Greek deities, there is more than one story about her origins. According to Hesiod’s Theogony, she was born when Cronus cut off Uranus’s genitals and threw them into the sea, and she arose from the sea foam (aphros). According to Homer’s Iliad, she is the daughter of Zeus and Dione. According to Plato, these two origins were of entirely separate entities: Aphrodite Ourania and Aphrodite Pandemos.

Because of her beauty, other gods feared that their rivalry over her would interrupt the peace among them and lead to war, so Zeus married her to Hephaestus, who, because of his ugliness and deformity, was not seen as a threat. Aphrodite had many lovers—both gods, such as Ares, and men, such as Anchises. She played a role in the Eros and Psyche legend, and later was both Adonis’s lover and his surrogate mother. Many lesser beings were said to be children of Aphrodite.

The vessel is an amazing luxury “Kaikki” completely made in heavy wood and handmade. It has 3 big masts so famous all over the caldera of Santorini for the unforgettable excursions it does every day for all the season especially dedicated to the mythical Sunset. 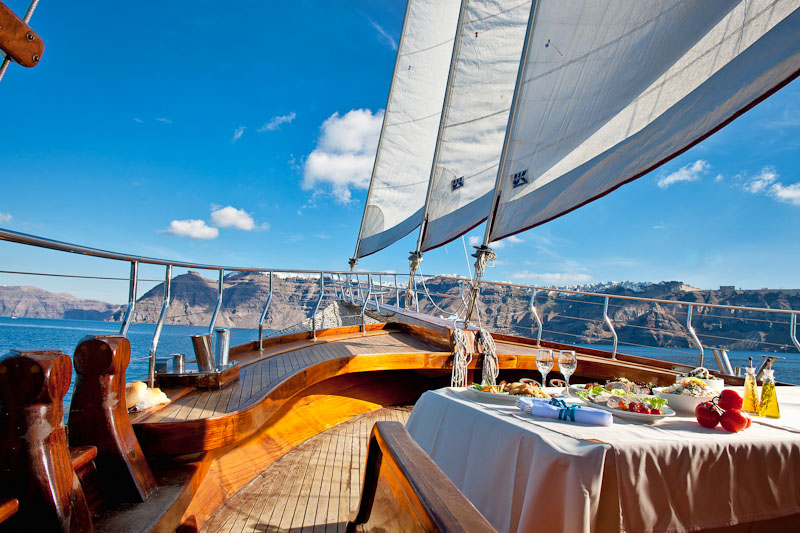 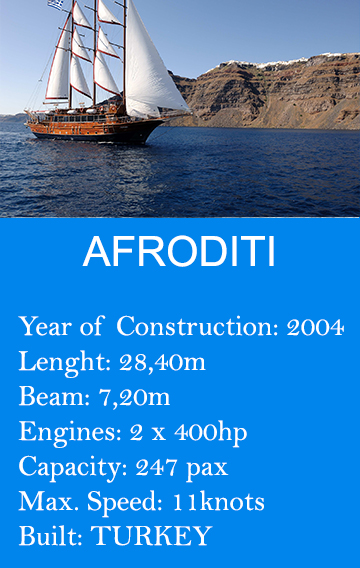